The Challenge is Complete

What are the Results?

If you haven’t been following along, you’ll want to start at the very first video to understand what the hell is going on here. On July 1st, 2015 I embarked on a three-month keyboard challenge to see how far my skills would develop on an instrument I have never touched.

In order to prove that my eBook is jam packed with experience and knowledge for beginners, I set out to show definitive proof through action.

Anyone can achieve their goals as long as you dedicate time while maintaining an iron will.

After only three months, I am able to play the popular theme song from the HBO TV series Game of Thrones.

And I didn’t just half-ass it with simple single note patterns.

I added chord progressions and two-handed technique to try and bring the true feel of the song to life.

I left mistakes in there because it could have required a million takes to get a flawless run after so little time with the instrument.

This final video above outlines everything you need to know, so take the time to watch it in full.

I really enjoyed doing this so I will consider making it a recurring series. In the future, I may select another instrument, even something exotic, to go fierce on for 3 months. I welcome anyone that wants to suggest an instrument.

For future runs, I encourage you to challenge me to see who can register the greatest level of progress. Now that’s something I can get into…

Game of Thrones Lesson I Followed

It just so happens that I discovered this after using this same girl’s channel to start the journey. I had no idea it would come full circle. I actually had to stop following her beginner lesson series because I didn’t have the specific book she starts referencing around Lesson 4.

Later when I was looking for someone that had a beginner lesson for Game of Thrones, I discovered her yet again.

The trust factor was there so I did not hesitate for a second.

You will notice that I used the intermediate version of the interpretation that she demonstrates. I felt that if I was going to hammer this thing out, I might as well go all in.

One Day You Can Have It All…

After doing this challenge, I remembered a great video I took back in 2012 when Rammstein came to Philadelphia. The keyboardist threw an inflatable boat out onto the crowd and surfed around on it. Fucking epic. I wore a Rammstein shirt in this video because of the memory.

Get Your Copy of Show Stealer

For now, I will be giving this eBook away for free to try and encourage people to take up an instrument and put in the time. So many people refuse to just take the time to get the job done and make the dream a reality.

It’s not even that hard because you learn to love putting in the work.

Enter your email address to have the eBook delivered to your inbox. 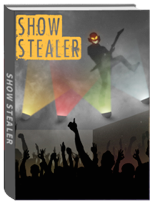