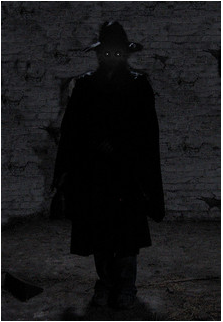 For the SEO sinners out there ranking a website becomes a leisurely, challenging activity to test your wits.

You’re a fool to think that search engines can’t be manipulated. Right now technology simply hasn’t been able to keep up with human ingenuity and deception.

What a computer deems “untrustworthy” is drawing on an algorithmic system that’s without gut instinct or a complex learning element.

If you pull up any site on the net, can you tell, right now, what the *purpose* of that site might be?

Any idiot can blog about a great number of things but over time there is a trust element and genuine feeling to the site that keeps real humans coming back for more.

Every site on the net was created for a reason but with billions of sites and massive quantities of information flying around, no group of people could possibly sort through it all to determine the useful from the worthless.

Sometimes that reason is simply to be a stealth, “fake” website that does nothing other than provide links to another site.

Algorithms try to predict credibility on a great many things, some of which are higher priority then others.

In the last decade, many, many people have abused these algorithms to make a lot of money. Affiliate commissions and direct sales come from web traffic and the more you have the more you make, regardless of your credibility.

This topic is far too deep to cover in a single blog post, so I’m simply going to describe one or two ways that people manipulate Google.

In the previous post on white hat SEO, I described in detail the ways in which you are “supposed” to earn credibility and trust.

Much like building a business or working out, it can take years of consistency and merit to gain any ground. If you’re blogging or selling in a niche that is completely dominated by major brands, you are a fool to think you might one day rank #1 for whatever keywords you are gunning for.

So, how the hell do you skip all that bullshit and just get on with the money making?

It’s not as easy as it once was, but let’s get into the scheming and tom-foolery used to fool the big G.

2) GSA and link building scripts – the reason you have Akismet

Web sites are bought and sold like real estate as they gain power and reputation over time.

Speaking of authority – does anyone doubt Wikipedia anymore? Maybe, but that respect wasn’t earned instantaneously.

Even bloggers can build up a sizable and successful site starting from nothing. If it has high traffic or perhaps makes a lot of money, you can just simply sell the domain to someone else and cash out.

Thing is, thousands if not hundreds of thousands of domains expire or are dropped every day because either someone forgot to renew them, or the person just didn’t realize the domain could have been sold off especially if it has juice behind it.

Domain auctions take place and people bid and go to war with each other to claim them.

In the previous post, I covered the idea of gaining links from other sites. They give you a “vote” of credibility, and the better the site that links to you, the better your site looks to Google.

But wait a minute…

What if I just bought a powerful domain from an auction and then link to myself?

Do I now assume the identity of that domain?

Or, you could doll it up to like nice and legitimate, write a beast article on a subject you are trying to rank, and link it to your money site.

A “money” site is described as such because it is a site you care about, that you are trying to rank, and can potentially be monetized. This could be your personal blog or it could be some one-pager that you threw up in 15 minutes.

In the white hat post, I mentioned the importance of anchor text and how Google uses it to try and figure out what the site you are linking to is about. In fact, this used to be an enormously exploitable way to ram your site to the top of any keyword search until Google smartened up.

Today, if you over-optimize your anchor text, usually on purpose, you will get penalized.

Let’s say I have a page about Ninja Turtle Action figures on my site. If Google looks at inbound links to that page and the anchor text is all the same:

…what are the chances of that actually happening naturally? Every single link is the exact same thing…by chance? It was almost certainly manually inflated or built by one person with one thing in mind – try to rank for Ninja Turtle Action figures.

Doing this *used* to get you crazy good rankings, but no more. It is far more likely that natural links would look something like this:

check out this site

this is the best Ninja Turtle Action figure site ever

You get the point.

Now, if you think it’s simply as easy as buying a domain, hosting it and linking to money sites, you’re kidding yourself.

Hosting, ip addresses, name servers, and registration name can all contribute to getting your site wacked never to come back again. Google can piece it together like a crime scene.

You can waste a shit load of time and money setting up an army of private blog network (PBN) sites only to have them utterly annihilated.

If every link to this very blog came from the same hosting company on the same IP address, it’s obvious what is going on.

Therefore, if you are going to use a PBN you will need to know how to hide it. When you start building up a lot of links and a lot of anchor text, you’ll have to track everything.

You’ll have to use all different kinds of hosting, toss Cloudflare in there, and generally troll around under the radar to avoid getting your PBN site immediately deindexed. Once that happens, you can toss the site out, it’s worthless.

The reason this is so powerful is that in many cases, 1-2 juicy links can push you to the top 5 in niches or searches with weak competition.

You still need to be careful but wouldn’t it be nice to rank a website #1 within, uh, a week or two?

Especially if that site has money making potential, even if only a little.

This is how many advanced SEOs boost their client sites in the background.

They do the research, they send some “fake” links, and the site moves up.

When you do it right, Google can’t tell and you make money until the site burns…which might never happen.

And by the way, clients will pay you thousands of dollars to move their sites…

Some people make $5k a month per client to sit around, do almost nothing but send 3-5 nice links to a site, and cash in.

Here’s a basic diagram of PBN links in action 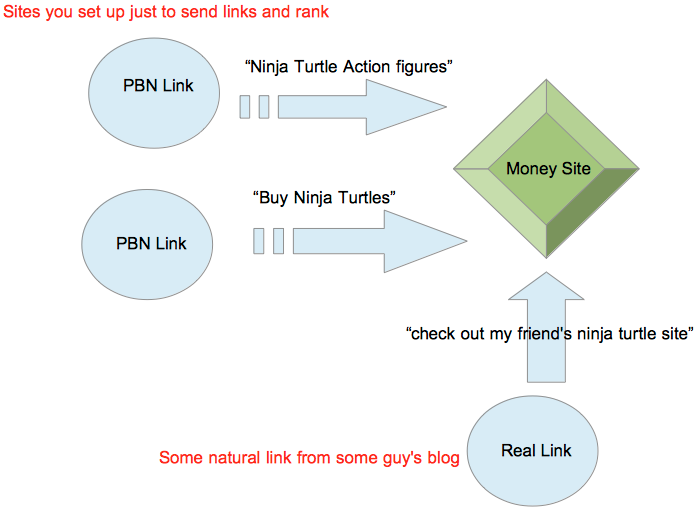 I’m no expert on GSA but I know plenty of people who use it.

People use many different types of software/scripts to mass link build and annoy the shit out of blog owners everywhere.

The point is to do nothing more then attempt to peg their backlinks all over the place in an effort to get micro-amounts of link juice that add up over time.

Once you know how it works, you turn it on and let it run sometimes for days and it will go out and spam the shit out of comments and trackbacks to try and get links in some way.

As I mentioned before, you used to be able to do this and point them all back to your money site, building a tremendous amount of link power in a short amount of time. You can still do it, but Google will destroy you.

Nowadays, it is recommended that link building in this manner be aimed at properties at least 3 tiers back from your money site. You can set up satellite Weebly sites or something that link to your money site, and blast those with links to try and power them up, thereby powering up your money site. not to mention the use of proxies, VPS, etc.

Some people still go this route and “churn and burn” simply trying to get as many leads as possible before the site gets hosed.

You could setup a site called “dentistchicago.com” then blow the hell out of it with spam links. It might temporarily rank and generate leads. As time goes on however, this approach seems to work less and less without knowing what to do, not to mention Google is out to stop it.

I don’t recommend anyone go out and start using GSA at all until you are highly competent with SEO, black and white.

I like talking about these things because when used properly, white hats still won’t have a chance.

Let’s talk about some real evil shit. When I say “evil” here I’m not necessarily implying that the person responsible is out to watch humanity burn, hurt people or the like.

SAPE is essentially a network of Russian hackers that you can pay to infiltrate high authority websites, planting your backlinks.

In fact, they already have stockpiled a shit load of sites that are hacked and are presented menu form, in the form of desirable metrics.

It can be pricey but having the link juice power from some savage websites that have years of authority and power can make your gimp site rocket to the top for certain keywords.

Imagine if someone hacked WebMD.com and gave your doctor site a backlink. It would cause the Earth to shake and that small site might immediately rank #1 for certain keywords, such as within a local market.

SAPE has a website but you generally won’t be able to get through to them there. Why this is I am not sure, maybe it’s a front or an effort to remain somewhat mysterious.

The way to contact and order these devastating hell-screamer links is to find the right person in an underground Blackhat forum. You generally talk to the right people and simply get referred.

Will I tell you? Maybe.

Unlikely if you have no idea what to do or consider SEO simply a “hobby.” I don’t want to be responsible for you burning your site to the ground.

And I am not going to act like it isn’t possible. If your site gets de-indexed or penalized, it might never be found again.

There is a strategy to using SAPE. If you want to know more perhaps leave a few comments and you might catch me in the right mood.

If you don’t know what you are doing, it’s best to avoid it. Using PBNs, GSA, and SAPE without experience will result in you destroying your hard work.

Using it correctly however can make you a lot of money, gain you some serious rankings, and give you a better understanding of how Google works.

I do NOT recommend doing this for client sites unless you really, really know what you are doing.

I really don’t care what anyone says – being strictly white hat will more often then not get you mangled by expert SEOs that play on the dark side.