Convincing people you are a god would no doubt pile on more power, popularity and cash faster than anyone who took the time to earn it.

The advantages are numerous and we can all agree that the label “god” is perhaps the highest title one might achieve.

So let’s eat some flesh, drink some blood, and roll in the mud as we explore what could be the greatest scam ever perpitrated.

When it comes to organized religion, I let Christopher Hitchens speak on my behalf:

“I’m not even an atheist so much as I am an antitheist; I not only maintain that all religions are versions of the same untruth, but I hold that the influence of churches, and the effect of religious belief, is positively harmful.”

As a young boy, the forced indoctrination that “Jesus is my savior” was without question harmful, but in some ways it stimulated my relentless skepticism.

We would hear stories of how Jesus cured sickness or walked on water but when I would ask my responsible and wise adult supervision why no one could replicate this feat today, they never had an answer.

In order to make my point, I am going to simply write the way I think…I hear a story about Jesus, questions come to mind, and no one seems to have an answer.

Don’t get me wrong, I’ve been victimized badly by a con man, but it’s my own fucking fault.  How does the con man sleep at night?

On a pillow full of your money.

Let’s just keep it simple.  Many of us have heard the story of Jesus curing the blind man by rubbing mud on his eyes.

Mud does not cure blindness.  It never will.  Someone please point to a peer-reviewed scientific study to rebutt.

But Jesus is a con man, the Joker of primitive Palestine.

He wants to become powerful.

Jesus determines that a long con would work wonderfully well, because hey, who is keeping track?

One day he pulls his lacky Judas aside and says, “listen…let’s pay some half-wit, send him into town to play blind.  He might have to pull the act for a few weeks, but if he establishes himself…I have a really great idea.”

Some time passes and the man becomes the “blind guy.”

Maybe they even beef up the credibility by paying some older folks to play his parents to “confirm” his blindness from birth.

One day Jesus waits for some suckers to gather in the viscinity.

He waltzes on over to the blind guy and makes a clever speech.

He then does his mud thing, curing the “blindness.”

Now everyone is stunned.  Shocked.  Surely he must be a god!

Penn & Teller use the same technique when they pull old school magic tricks that have been around for ages that the common person wouldn’t know.

Now the con becomes a sapling.

Jesus keeps pulling this shit until he has a cult following.  Stories spread far and wide and it just keeps paying off.  Maybe he gets laid constantly from it and you never see that in the books.

Maybe he scammed people out of so much money he kept a “poor” disguise.

The ultimate magic trick might be bringing someone back from the dead.  Lazarus provides the assist, possibly pulling a twin brother switch or some other bullshit we will never know about because it was 2,000 years ago.

But that isn’t enough.

It would be even more amazing if Jesus himself died and then brought his own ass back to life.

Now, here’s one thing that has always bothered me about the Resurrection story.

Judas betrays Jesus and then from there we all know the “story.”

But why the hell is Judas the bad guy here?

Dante has him face first in Satan’s mouth suffering the worst punishment imaginable.  Probably could’ve stuck him in Satan’s asshole, but we’re splitting hairs. You have to be a real cunt to betray a good friend, for selfish reasons.

Were they good friends turned enemy?

Or were they in on this scam together?

The reason I bring this up is that if Judas does not betray Jesus, does the Resurrection even happen?

The Resurrection, the central tenet of Christian theology.

You’re telling me it was in God’s master plan for someone to take the hit on this?

Judas was in on this shit from the beginning.  Now keep in mind, Jesus “predicted” that someone would betray him.

If there is one thing to know about con men or mobsters it’s that they normally don’t bet on the outcome of something unless they know the result so they pull a Rothstein.

When you ask a priest or a teacher or whoever about this, they don’t have an answer.

I want an answer because I am not believeing this shit on faith.

Next time you are in a debate with some Christian fanatic, ask them why Judas isn’t the MVP of the Resurrection.

Ask them why the hell that was God’s ultimate plan.

Then we have the Resurrection itself.

Some guy (Jesus?) dies, and then rises from the dead 3 days later.

Now, there are modern stories where someone goes to the morgue and suddenly wakes up.  Just Google it.  You’ll find that it happens more often than you think.

Edit: Just days after I published this, it occurred yet again.  One author even referred to it as the “Lazarus phenomenon.”

Was Jesus actually dead? Was he just long-conning it again in the tomb, knowing that a 3 day stay would be convincing enough to the average jabroni?

Did Jesus secretly have a twin brother this whole time, pulling a convenient switch?

Upon the success of this scam, the payout could be immense.

No one rises from the dead.  But he did.

Now, he walks the earth and he does as he pleases.  Gains followers. Gains power. Gains whatever the hell he wants.

People keep writing about it and word keeps spreading.  A virus out of control.

They really want something to believe in and his magic trick is the only thing that gives them hope in a cruel, punishing world. 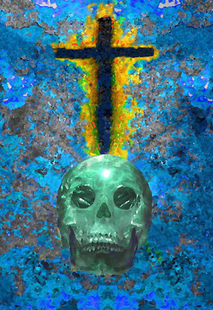 More con men realize this, so they ride this magical mystery tour for centuries, sucking money and power even to this day.

This is why faith is a problem.

Whether or not Jesus was a con man – can you tell me he wasn’t, with absolute certainty?

Can you tell me he was “God” with absolute certainty?

Maybe he was an alien that smoked a lot of Earth grass while shitting out super technology.

I think he was a damn good con artist.