This guy opened a local bar near me.  It’s been highly successful right out of the gate.

After going for awhile I met him and spoke to him.  It was quite apparent that he understood people.

Rarely did a person enter without interacting with him and he insisted that his staff remember everyone’s name.

His awareness of human interaction was sharp.  The atmosphere is always pleasant and offers a good alternative to the loud music-blaring “popular bar.”

Conversation thrives.  An older crowd makes up the great majority and the storytelling is often attention grabbing.

I studied the operation for some time and realized it is nothing more than one man’s playground.  One man made the right choices and good people show up.

He looked at the world differently.  I could already tell.

I didn’t know, but I suspected.  I soon found my inclination was authentic.

“It should be mandatory.” He replied.

That’s all it took.  An instant highway into his mind.

From there, every word out of his mouth was predictable, everything he said or did already knowable.

This person saw the other side.

There is a different way in which the world appears, right in front of your eyes.

Most people have never seen it.

Lives that could be richer, plundered.

LSD should be mandatory.

When you were born, you began to experience the world outside the womb for the first time, though you can’t remember it.

Shortly after, you become a child but it’s still difficult to recall many distinct memories.

Observing children leads to a few certainties – one being that they love to explore.

They lack both experience and wisdom.  Walking around aimlessly, they will try to eat small objects and would lick a piping hot stove. Experience corrects this quickly, however wisdom may or may not stick over time.

After awhile, conditioning from your parents, schooling, and repetitive routines start to form, and your brain begins to deprioritize sensory information.  You won’t randomly chew on car keys and you’ve learned that hot things lash you with immense pain.

Now, all throughout this time your brain is taking in sensory information, such as the beautiful weeping willow you are currently walking past, however it begins to dismiss information that doesn’t seem to be relevant to what you’re doing.

After all, you’re headed to softball practice and your smart phone is pummeling you with notifications.  You don’t have time to think more deeply then is needed.

The point I am trying to make is that over time, your conditioning becomes your operating system.  It is heavily influenced by culture, schooling, and more recently technology.

Now, what would happen if you could temporarily disable this operating system, which has been running steadily ever since you passed adolescence?

What if you could immediately interrupt the operating system process for a few hours, which is very short in the grand scheme of a lifetime.

Imagine having the child-like desire for constant exploration and learning, but with the wisdom of age.

In other words, you still know that touching a hot stove might melt your skin off, but holy shit, the flower bed across the street looks fascinating!

It’s the same flower bed you may have walked past one thousand times, but you were conditioned to ignore such an “insignificant” part of your day, with your cultural operating system running full steam.

During the psychedelic experience, the world itself takes on an entirely new set of rules. Your finely tuned awareness of sensory information overloads you with interest and potential discovery.

Why is this important?

It’s an alternate human experience.  It isn’t describable in words, because no word that I know of at least could even remotely capture it.

It must be experienced first hand.

However, it completely changes your understanding of how your mind might work.

Sure, it can be frightening, because it’s completely new!

Will I ever return to “reality?”

It convinces you to reevaluate human experience itself.  I found that it taught me to ask the question, “what might that person be thinking or feeling?”

I felt like I had a third eye.  Completely ineffable, and tedious to explain.

But shit, what are we doing here if not to get deep?

The best way to understand it is like this…

Simply look forward, and think to yourself, I am *not* actually seeing all there is to see.  Or, I’m not *fully* seeing what’s in front of me.

The only analogy I can come up with is the scene from The Matrix when Neo becomes fully aware. 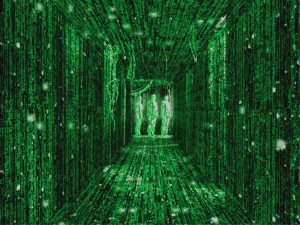 It was always there, but now it’s immediately apparent.

The third eye can be “beamed” in certain directions, providing an intense, magnificent focus on whatever it is you are looking at.

It feels as if this extra sensory data is coming in through the forehead, which is why you see this typical psychedelic artist’s interpretation: 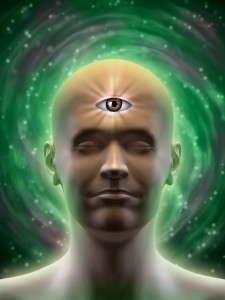 This isn’t somebody just making up art because it looks weird and cool. It’s exactly how one might describe an extra visual sense that is at your disposal.

Here’s a decorative mask that a friend from Nepal gave to me as a gift.  Notice the third eye. 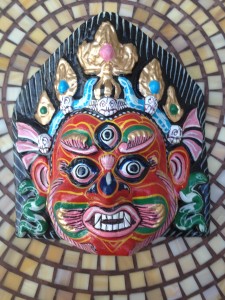 I can’t say for certain that this artist intended to represent the psychedelic experience, but I know that it appears in many cultures throughout history.  Shamans were particularly known for their ability to harness the power of the mind with the use of mind altering drugs, many of which are found in nature.

I have two very memorable experiences from my first trip.

First – when I looked at ordinary white light, I could see the spectrum of colors (ROYGBIV) rather easily.  They were simply apparent to me.

Someone who had looked through a high powered lens might say “eureka, did you know that light is actually made up of different colors, sonny boy??”

“Well yeah…I’ve always seen that.  It’s completely apparent” might be your response.

Second – at any given time, you are likely surrounded by multiple sources of light.  It’s hard to see the actual beams of light, but you know they are there.

While beaming around this third-eye power, I would focus in on one light source. Very seriously, without pulling my eyes away or closing them.

After about 10 seconds, all other light sources appeared dimmer, but the source of focus was brighter and isolated.  It was as if my brain is saying, “oh, you would like to see only sensory information from that light? Let me dim the sensory input from the others for you.”

Try explaining that to a blonde at the pub.

You’ll get laughed out of the room.

I think the person that describes it best is Terence McKenna.  He seems to have a fantastic way of putting it into words, though in truth it’s an impossible task. Check out this quick video where he uses the phrase “cultural operating system” to teach us about psychedelics.

I highly recommend the book Food of the Gods, a great discussion on his stoned-ape theory.

So Why is This So Important?

LSD teaches you to be hyper aware of human experience. It forces you to rethink your very existence on this planet.

Sure, that’s scary as fuck to some people.  There’s only one way to know though, and that’s to try it yourself.

Timothy Leary, the “high priest of LSD” was dubbed “the most dangerous man in America” by Richard Nixon.  Why might that be?

Ken Kesey, author of One Flew Over the Cuckoo’s Nest, often took psychedelics while working at a mental hospital.  Wiki excerpt:

There, Kesey often spent time talking to the patients, sometimes under the influence of the hallucinogenic drugs with which he had volunteered to experiment.  Kesey did not believe that these patients were insane, but rather that society had pushed them out because they did not fit the conventional ideas of how people were supposed to act and behave.

Imagine what this means.  Was he hyper-aware of human experience?

Perhaps the solution to the mental health issue is to focus on the understanding of human experience, and not drugging the hell out of people?

Famed comedians George Carlin and Bill Hicks would often go on at length about the importance of doing psychedelic drugs.  That’s why they were up there, teaching, in the funniest way possible so we would listen.  Bill Hicks described magic mushrooms as “an accelerator button for evolution.”

Cary Grant insisted that the LSD experience should be a “rite of passage.”

Jimi Hendrix is considered by many as the greatest guitar player of all time.  Everyone has their tastes, but his link to LSD cannot be denied.  In fact, it became a significant part of his lore.  The same goes for Syd Barrett.

Steve Jobs considered LSD to be one of the two or three most important things he has ever done in his life.

Notice how experience is what matters first…

Has Apple lost their innovative edge because they sorely lack the LSD influence they once had?

I want to leave you with this…

LSD can encourage some of the greatest self-reflection you’ll ever have. However, it must be used properly.  We need to work to release it from the painfully misinterpreted demonization by the control freaks of the past.

Until then, LSD education remains mired in a deep, sludge-filled swamp.

When tripping, set and setting are of paramount importance.

Make sure you are with good friends, an experienced guide, and someplace where you can be carefree – like a child in wonderland.

At some point I will likely expound on some of these individual closing thoughts, but feel free to ask me any questions you’d like in the comments below, and I’ll try to answer them.

LSD is a psychedelic drug which occasionally causes psychotic behavior in people who have NOT taken it.