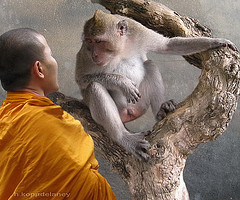 No one knows what the hell is really going on.  We are floating around on a giant rock in space.

Having a serious attitude all the time will contribute nothing to the progression of humanity.

Recently I attended my grandmother’s funeral, and it was a somber affair.

She was a great woman who had a marvelous sense of humor.

My younger cousins were very emotional during the services so I spent a lot of time trying to make them laugh to lift their spirits.

It worked but others in attendance seemed to wonder why I felt the need to make a joke about every damn thing.

Sitting in an office meeting during my corporate time, I relentlessly quipped and joked until my co-workers lightened the hell up.

People seem to work more effectively with a smile on their face.

At band practice, we would mangle the same song sixty three times in a row yet I still made it more of a farce than a blame game.

Someone who says there is no room for laughter is simply someone I do not want to be around.

I believe few people strive to improve their capacity to inject humor, often because they don’t think about the fact that it requires practice and forethought.

My friends have remarked that I am particularly witty, but what they often don’t realize is that I strive to be that way.

Much of it comes from the realization that life is absurd, and even the worst of circumstances can teach you something.

What you take from life’s toughest lessons can mold your inner wise guy. A dark or stressful situation becomes associated with happiness or being jovial.  It will do wonders for your confidence.

This constant clowning and searching for the joke in everything can be taken too far, and psychopaths or some criminals may derive delight or pleasure from the worst behavior.

Their inner sense of humor has become far too selfish.  The masterful humorist is the person who can so easily share it with others, laughter being evidence.

Emboldened by this new mindset, you will learn to listen closely to what people say. Quips and jokes can be found at any moment and the person who is constantly anticipating will appear to have a sharp wit.

Great leaders often have a sarcastic and even dark sense of humor.

Chisel yours by finding the joke in anything.