I love running, exploring, and thinking. All at once.

It clears your mind, keeps you in shape, and let’s you freely roam the local scenery.

The other day I decided to go for a jog, and randomly stumbled upon a small path leading into the woods.  Figuring what the hell, I decided to take it.

All of a sudden I’m in this local wildlife preserve.  I knew it existed but didn’t realize there were a number of trails that zig-zagged through the area.  Idiot.

I’m checking out red-tailed hawks, random fish in a pond, and grabbing tree limbs to crank out some pull-ups. 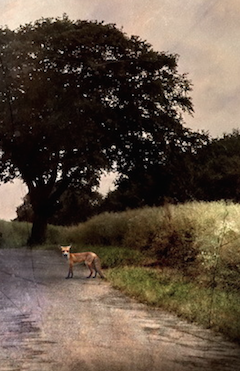 As I’m making my way down one of the paths, I see directly ahead of me this red fox, just trotting up the way.  He’s looking right at me but he’s still coming head on.

I stop and stare at this creature…just strutting around like he’s never had a dull moment in his life.  Proud of its latest kill… looking for a way to prove its dominance.

It walks within ten feet of me then turns and bolts down a fork into the woods…came and went just like that.

Right before he emerged, I had been reflecting on my life as a whole, and what I had accomplished. What defined my life? Do I consider myself successful?

Watching the fox sprint away despite being so close became an ever looping video in my head.  Had I let too many opportunities get away?

Two days later I’m on the opposite side of the preserve exploring some wetlands. I take a fork toward it-doesn’t-matter-where and look who’s there.

Walking up the path ahead, like some arrogant little beast, is my newest nemesis.

This time, he stops earlier and looks at me, but I don’t stop.

I unleash an all out sprint aiming right at him.  Wings of fire and a face from hell scorch the land as I become determined to stay with him…

Startled, he turns to run but there’s a lot of open space this time and I can track his every twist and turn.

This thing is fleeing in an utter panic as I refuse to let up.

He gets away…but it was closer this time…

Life is sometimes nothing more than a constant chase.  A challenge presents itself, and despite a few failures the next day comes and another opportunity arrives.

The fox is there waiting.  I know he is, and next time we meet I’m going to try and get as close as possible for a picture.

Seize an opportunity.  Never give up.  Chase until you’re completely spent, and then chase some more…