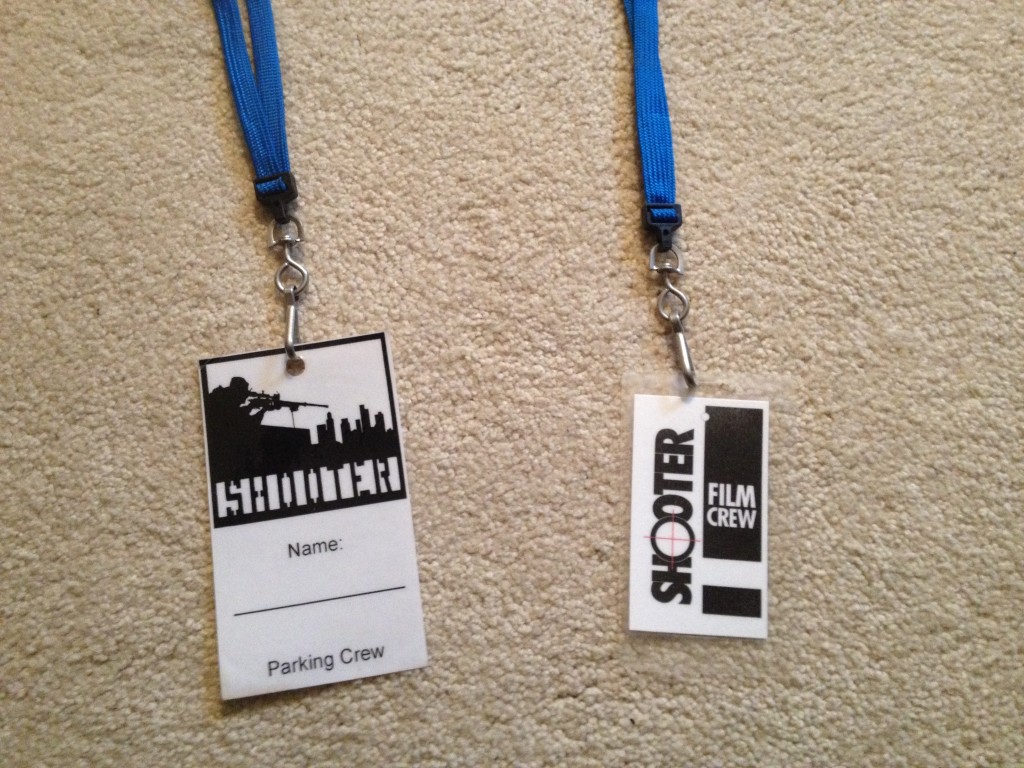 I got a job on the set of the movie Shooter featuring Mark Wahlberg and I didn’t have a single minute of experience.

Coming out of college, I wanted to write and direct films.  I looked for anyway to break into the industry, where normally you have have to know someone or get lucky.

The movie Shooter was filming in Philadelphia for a few weeks, and I saw an online ad posted for “parking crew.” It described the drab duties of the job, but more importantly it had a line that read “many people have broken into the industry by becoming a parking assistant.”

I figured what the hell.  I applied and was accepted fairly quickly, which was not surprising because the entire job was to stand and guard parking spaces in the busy city area for 12 hours straight so that equipment trucks would have no issue finding a spot.

It was particularly brutal and boring.  One of the guys I worked with and I frequently hopped into a local pub to grab a beer every few hours or so because we literally hadn’t a single thing to do but sit on the curb.  Plus, women saw the “crew” credentials hanging around our necks, and it was a great ice breaker.

After two days of this, I decided enough was enough.  I needed to make an impression on somebody important.  Sure, I got close enough to the filming action to see Mark Wahlberg judo flip some guy into a wall…but so could the average street bystander.

One day, I saw crew members carrying coolers of water into the set.  There were 3 guys, but 4 coolers.  They left one behind, and walked through the fence into the roped off set area.

I quickly grabbed the 4th cooler and walked right past the security team with my unmistakeably real parking assistant lanyard (pictured above).  I dropped the cooler almost immediately and surveyed the scene for someone to talk with.

I saw a man who later revealed that he was the assistant director noticeably frustrated as all hell.  I walked up to him and asked him if he needed help.  Lady luck threw me a bone because his immediate reaction was that he did, as one of the Production Assistants had quit.

“I have production assistant experience” immediately came out of my mouth, bold and with authority.  I looked him in the eyes, and despite his initial hesitation, he nodded and gave me information on how to contact someone who could get me a job on the set.

The next day I was awarded a walkie talkie, an ear piece, and film set credentials.  The other parking assistants nicknamed me “Upgrade” and were noticeably jealous of my day 3 promotion.

I interacted with Mark a few times.  I helped direct extras.  Even contributed to actual shot decisions which made it into the film.

There is a scene in the movie in which Mark Wahlberg fights Michael Peña under train tracks.  The director, Antoine Fuqua, really wanted a shot with the train speeding by, but it was too hard to get everyone ready before it was too late.

I immediately suggested that I could jog to the train station nearest the filming location and radio to the set when the next train was on the platform, giving them a solid minute or two to prepare.

It worked – and the shot made final cut.

I didn’t actually end up getting a long term gig from this, as the crew moved to Canada to shoot more scenes and they always use local production assistants.  But with some confidence, a “fake it till you make it” demeanor, and sly thinking, I was able to contribute to a big budget Hollywood Film.

I have periodically told viewers,

“I know you can’t see me, but I’m literally standing right next to the camera.”

Previous Post: What Game of Thrones Can Teach You About Speaking
Next Post: Should Ted Bundy’s Pornography Warning Be Taken More Seriously?