*SPOILER WARNING – Don’t be a Fool*

Game of Thrones returns tonight and I’ve finally gotten over the fact that I will not be able to read the next book before the show ventures off into its own direction.

I personally think this is one of the best stories ever written, with so many “gray” characters that it nearly embodies the entire theme of this blog.

This post will not summarize the entire story nor will it comprehensively break down every action of every character.

Go read a Wiki of Ice and Fire for all facts and references. I’ll point to a few pages as we go.

This post is intended for those of you that have read the books and/or caught up on the HBO adaptation.

If the leading theory about Jon Snow is correct, then good ol’ George has potentially setup an amazing Darth Vader timeline…

A Song of Ice and Fire might literally be the epic events that followed when a young boy was born from a Targaryen (fire) and a Stark (ice).

Jon Snow has essentially been an underdog all of this life.

He’s been cast aside as a “bastard” and no matter where he goes, he suffers from prejudice and general ill will.

In book 5 and in the final episode of season 5 on TV, Jon is apparently killed.

Many of the cast members say nothing more than “yes, he’s dead,” but what the hell do they know. Most of them haven’t even read the books.

But, this could be a clever way of objectively answering the question…

I think he’s dead too…

But what does “dead” mean in the world of Westeros?

Melisandre Will Resurrect Him

Thoros of Myr was able to bring Beric Dondarrion back from the dead multiple times, using his skills as a red priest.

As a fellow red priest, one would think that Melisandre is capable of the same. She’s already shown that she can shit out an assassin phantom so resurrection might be child’s play at this point.

I think this is the obvious route.

It might fulfill the prophecy that Jon Snow is Azor Ahai reborn.

It would also mean he dies as the 998th Lord Commander of the Night’s Watch.

Someone would take his place, as the 999th.

He would come back with a nice “fuck you” and retain the position as the 1,000th, which is a nice benchmark number.

Some Kind of Warg Scenario

The Starks seem to be born with an innate warging ability, with Bran being the most powerful example.

Is it possible that Jon simply wargs into Ghost while his body is making a last desperation gasp for survival?

I think this is possible but it leaves out the fact that Jon would essentially be a wolf for the remainder of the series, unless he can warg back into a human later on…

Probably the theory I would least like to come to fruition…

If this happens, then fuck you George. 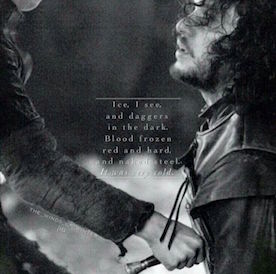 Before I begin, I want to establish the fact that I thought of this scenario myself, however many others could have surely come to the same conclusion.

I think it would be an amazing story if Jon Snow gets turned to the dark side and becomes the de facto ultimate warrior for the forces of Ice.

Side note – many people think that the White Walkers may not actually in fact be “evil,” but for the sake of this discussion we will assume they are anti-fire, anti Targaryen/dragons.

The following is how I would see it playing out…

First, I observed one interesting cue that comes from the show…

When Jon kills the white walker in the epic duel at Hardhome, just the way the (Night’s King?) looks at him is eery, and it almost seems like he has a fascination with Jon…

I think this look is something in the vein of, “hmm, we could use this guy on our side. He’s something powerful, something special…perhaps we can turn him…”

Some argue that this is the Night’s King realizing that Jon wields a Valyrian Steel Blade, which can be used to defeat White Walkers.

I’m not so sure, but onward…

I can definitely picture a scene in which the Night’s Watch, largely inexperienced fools when it comes to the Walkers, simply toss Jon into the cold up north to rot with his “wildling bitch.”

This would present the perfect opportunity for his body to be pilfered and turned.

It would also assume that no one steps up to burn his body or that Melisandre wields no influence, which she doesn’t especially now that Stannis is gone from Castle Black.

Snow Gets Turned…But Not Completely

One notable character has been missing from the show – Cold Hands.

Here’s a guy that apparently is turned undead, but maintains some form of humanity.

The leading theory here is that this is actually Benjen Stark.

If that is true, then we have evidence that perhaps the Starks are partially immune to the effects of turning into a wight.

If Jon gets turned, he might actually retain some semblance of humanity, which leaves open, you guessed it, the possibility of being redeemed in the end somehow…

Let’s say Jon is turned and he is semi-human.

He’s aware of his past and perhaps still has “feelings.”

He’s done everything he can all of his life to gain acceptance and respect, but he was ultimately betrayed by his own “brothers.”

As far as he knows, his family is nowhere to be found, possibly wiped out completely by the ongoing war in Westeros.

It’s time. To kill. EVERYONE.

The Walkers begin to overrun all.

At some point, Daenerys is successful in taking the throne, or at least finally arrives in Westeros and realizes the threat from the north.

A huge and ultimate clash is on the horizon…

The X-Factor – An Old Friend?

One of the most compelling storylines very early is the “bastardly friendship” between Tyrion Lannister and Jon Snow during their trek to The Wall.

It’s clear that both men ultimately respect one another and there’s an incredible final cog in all of this mess that might lead to the redemption of Dark Snow, should he go on a path of ultimate destruction.

Tyrion has now sided with Dany and might eventually become her closest ally.

Wouldn’t it be amazing to see him riding a dragon after all of the shit he’s been through?

Let’s say Dark Snow and Daenerys are battling it out in the final show down.

Perhaps Snow has gained the upper hand, Daenerys is about to fail and all of Westeros will fall.

Tyrion now steps in, begging Jon to snap out of it and recognize the Night’s King as the true enemy.

“Snap out of it you fool!” Tyrion shouts as he tries to convince Jon to turn his blade the other way…

I think this would be the most outstanding storyline, one which further caps the universal theme of dark versus light.

There are so many factors and families in play that to try and break it down to that level of detail is too much for this post alone.

Life itself is just a huge game, a struggle between “good” and “evil.”

The Star Wars Darth Vader story is so powerful because it embodies this theme so well.

A Song of Ice and Fire is even more complex and has the potential to once again hammer home the fact that character complexity and greatness comes from a balance between ultimate dark and ultimate light.

The theme of this blog is such –

You never want to be too far down either path.

Total light is to deny the nature of man.

Previous Post: You May Stop Your Internal Dialogue – All Drugs Should Be Legal
Next Post: 5 Guitar Legends Walk Into a Room…