It is often said that your actions will live on and most influence the way people perceive you.

When you listen to people talk about Lemmy Kilmister, it’s an endless array of stories about a respectful, jovial, and honest man.

Yes, he was a rock star. But in many ways, he was the rock star…

Infinite charisma, fascinating opinions, and a talent for storytelling.

I remember as I got into metal, I really didn’t listen to Motörhead much. It wasn’t that I didn’t like it, it was that I just hadn’t really discovered it yet.

What I did notice is that many of my favorite musicians (James Hetfield, Jeff Waters, many others) appeared in many a photograph wearing a Motörhead shirt.

I remember thinking to myself, man that band must have really made an impact, or someone made an impact if all of these guys are rocking this t-shirt.

I used to sit at work rotting away and spent all of my time watching old Metallica concert footage or random clips of bands partying backstage.

I related to it in so many ways. Something about the attitude, the no-fucks given approach to life that I was no where near in my current state.

I used to sit there and fantasize about dropping everything and going for it all.

The biggest problem was that I just simply wasn’t that good and was too far behind on practice and experience.

I also didn’t really have any musician friends, and even if I did I don’t think anyone would sit around and spend hours and hours practicing and skipping work to get it done.

But it was guys like Lemmy that drew my attention. I was so drawn to him as a person, a musician, and just the way he carried himself.

Hell, even the things he said. He just gets it.

He often said that “LSD made him a better person.”

As an advocate of LSD, I know exactly what he means.

The world is fucked because too many people don’t get it.

It can’t be explained. You either know or you don’t know.

Without even hesitating… “awful terror.”

No question about it.

Our “leaders.” Their “policies.”

We’re on a path to hell, and some people know.

Once you know, you either gain a sense of humor or go insane.

I once snuck backstage at a Megadeth/Motörhead show. It was one of my first pulls so I actually kept it conservative as I didn’t want to get my ass thrown off stage.

I got back there while Lemmy and crew were rocking. I remember I positioned myself so that when they were done, Lemmy would walk by me to get to the dressing room.

As he walked closer to me, I thought about all the stories about Lem…how he’s such a great guy, about his friendly nature and genuine aura.

He looked me right in the eyes, and without hesitation. “Thanks man.”

But it was the way he said it. It was so damn authentic.

I could’ve been some sewer rat, but he still took the time to seriously acknowledge me.

The point is that for me, it immediately validated everything I’ve ever heard about him in the span of one second.

One second is all it took and I knew every story about his greatness must be true.

Michael Poulsen of Volbeat was the opposite. I briefly tried to strike up conversation with him and he flat out ignored me.

I remember when I played my first gig, I was pretty nervous and shit, who wouldn’t be.

Never played in a band in front of a live audience that showed up to hear you play.

It’s kind of strange to think about, but I’m always thinking harder than normal about what I’m going to wear on stage.

Now that I play a lot, it’s often just to show off some of my musical tastes.

But back then, I distinctly remember looking at my Motörhead shirt and instantly knowing that was the one to wear at my first gig.

Because I felt that I needed to channel greatness in some way.

I needed the spirit of Lemmy on stage. 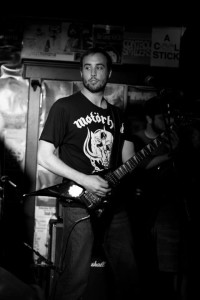 So there I am, playing my first gig with a $100 Jackson Randy Rhoads.

I started from nothing, no background in music as a kid. Nobody forcing piano lessons on me.

I just knew I always wanted to be in a band and I was going to have to make it happen because no one was going to do it for me.

I practiced and practiced until I could do it, and even to this day I still suck but I gig almost every month.

When I was 23 I told my friend Pat as we smoked a joint – “I’m going to be in a band by 30. A good band, not some shit band no one cares about that calls it quits after 2 months…”

I achieved that goal by 27, and as of right now the current lineup has held strong for almost four years.

It’s all documented in my ebook Show Stealer.

I remember I used to think like Lemmy. I needed to be Lemmy.

Would Lemmy watch TV, or would he sit around practicing until he was better than 99% of humanity?

It was clearly the latter…

I thought I would share how I go about practicing for a gig these days.

Our band is so solid at this point we probably go months without playing and still come back ready to rock, in sync and professional.

Usually two weeks before a gig we decide on a set list so that we can hack away individually before a group practice.

As with any skill, guitar playing ability will wane and erode over time unless you keep your chops up.

In the same way an athlete must condition himself before a performance, the pro musician must do so as well.

There is no question that the difference between practicing for weeks and not doing so is immense.

It simply “flows” when your muscles are ready to respond to your brain, which could be going haywire with ideas or simply needs to recall a riff sequence.

The principle is simple. It’s got 365 exercises, one for each day of the year.

Most people fail to improve at guitar because they literally have no structure, no system, no discipline.

They’ll sit down and noodle their favorite song for a bit. They’ll work on a few random chords, then ultimately get bored or demotivated because they always do the same damn thing.

This book gives you one thing to focus on each day. This is immensely powerful because you sit down and just take the challenge.

Sometimes it’s chords, other times it’s arpeggios but the point is your doing something new or building on something from a previous week almost every day.

If one exercise was particularly easy, just hop to the next one. If it’s too hard, spend two days on it.

I make sure to do this for the two weeks before a gig, and even before that if possible.

It’s not always easy to play guitar literally every single day since I put close to 14-16 hours into my SEO business, but this system keeps you focused and in the zone.

Once I do a daily exercise, I immediately rehearse every piece of every song we play.

It doesn’t matter if we have played the song 500 times already. I need to make sure my brain is relearning and storing what it needs so it’s fresh by gig time.

If you watch Metallica pre-gig, you’ll see that they are always practicing songs.

You think they would have “Blackened” and “Puppets” mastered by now to the point of exhaustion.

If you want to be good, you never stop practicing.

If you can’t understand that, you will never be good at anything at all.

Most people quit guitar or another instrument in the first 3 months because they see no progress.

You have to be in it for life.

I did a 3-month keyboard challenge with this same routine to prove that even in that short amount of time and with no experience you can still get pretty good. I was able to play the friggin’ Game of Thrones theme with two hands.

That’s how you get to point where others wish they were you and you’re thinking “wow this is not even that hard…just took a little work.”

When I am trying to nail a solo, I make sure I work on every small little aspect. Not a single bend or hammer on will go without intense focus on each individual part.

When you approach it this way, you will win my friends.

I want to leave you with some quotes that have just stuck in my head over the years. Stuff I’ve heard legendary guitar players say, or a wise pointer that was written in some guitar column…

In some cases I’m paraphrasing, but the point still hits home.

The advice is always so simple, but it’s ultra powerful and the reason they’re the gods, folks…

From time to time I will come back and add to this list, but for now…

“You need to be able to play what you hear in your head.” – Billy Gibbons and Dave Mustaine have said this…

“If you toss aside everything else in this workout, keep this section. Training your ears is the most important practice in making the crucial connection between imagination and your fingers.” – Steve Vai on ear training, from his 30-hour guitar workout

“Don’t worry about scales, just play any note. Anything can sound cool at the right time.” – Marty Friedman

“You should be able to play for anyone.” – Joe Satriani, when talking about playing for girls, older people, kids, etc.

Previous Post: Always Have a Line
Next Post: Is This WebCam Sex Site a Great SEO Case Study?