I snatched an opportunity to pitch a screenplay to Hollywood producers by completely winging the sell.

Back when I was in college, I had absolutley no direction and floated around from class to class.

I was arrogant, convinced I would be successful, yet had no résumé or real accomplishments to back it up.

Storytelling and writing had always come naturally for me, and somewhere along the line I gravitated toward film.  I loved the idea of trying to capture on tape an idea or emotion, through story, that people really enjoyed.

A perennial goofball, I generally quip and joke at every opportunity, which can be a bit relentless for some people.  Mainstream comedies that took over the local theaters were absolute shit and couldn’t hold a candle to classics such as Caddyshack, Ghostbusters, or Young Frankenstein.

I fucking hate The Hangover.  It is a steaming pile of dog shit that got attention for absolutley no reason.  The humor is trash level and when you justify everything, literally anything, with “I got too fucked up and don’t remember what happened,” you aren’t clever or witty enough to execute polished humor.

Anyway, I decided to take classes in school that focused on the art of screenplay, for no other reason then to hone what I considered a fairly good knack for writing and being funny.

I banged out about 90 pages and created a feature film’s worth, and essentially threw it on the shelf for a few years.

Later on, I stumbled upon an ad in the newspaper that summoned any and all takers to come to an open screenplay pitch competition in Philly, my home city.  I said well shit, I have a full length comedy, written…should I pitch this thing?

I remember waking up early as hell to get there on time…I wrestled with the idea of even going because I would have to book it down there, not to mention I had never even done this before so I had no idea what I was walking into.

I hopped into my car and hit the road.

As I pulled into the parking lot, I realized my story had a plot hole.

I had to patch the damn thing on the fly, in my head, as I approached the building, ascending steps to the waiting room.

There were nearly 60 people standing in line, rehearsing, pacing back and forth, reading notes, and generally letting their nerves go haywire.

Their body language gave it away.

One guy was mumbling out loud about what he had learned in screenplay pitching class the week before.

Class? People take class for this?

What the hell am I doing here?

I was actually considering a bail out – pathetic.

One by one we entered this room where a panel of judges called you up to the front.  It was 2 minutes per person, and everyone there got to watch.

I winced as cringeworthy pitch after pitch unraveled before my eyes.

One guy made voices for every actor in his plot.  Another guy tripped up every three words while reading a sheet of paper.

I immediately realized one thing.  It almost didn’t matter what they were saying, it mattered whether or not the judges liked them, as a person.

They were really selling themselves and not a movie plot.

Realizing this, I changed my entire strategy.  I decided to just wing it and be an absolute joker.  I did anything I could to make them laugh at me.

Sure, I worked my plot into it, but I managed to convince them that I was a funny person. I acted like a complete jackass, some psycho scheming this ridiculous story that in fact had inspiration from events that happened in my life.

The judges, and more importantly the rest of the room, were in stiches over my foolishness.  I knew they thought I was funny, and therefore they were sold.

The next day I got the call – I was selected to pitch for Hollywood producers who were flying in the next week.

I was excited, but a bit cocky now.

This time I was standing in a room with an audience that was made up of people in the film industry.  The judging panel were more cutthroat and my level of nervousness was, to this day, higher than it ever has been.

I tried to replicate the exact performance I did a week before – but it didn’t work because you can’t replicate something that was improv’d to near perfection.

I was miffed, but in reality, didn’t care that much.

With a little wingery, I was standing face to face with Stephen Rivele (Ali, Nixon).  The opportunity was there…the idea was ripe…

During this time I met a new friend, Dan, who also pitched a comedy.  His was much better than mine, I thought. He and I got along very well, and he inquired about my current job status.

I was unemployed, so he offered to get me a job at his ad agency.  I took it and ran.

All of this led to a whirlwind of wacky shit, from collaborating on screenplay, to flying out to California to go behind the scenes at Warner Brothers for a personal tour.

Here’s my visitor’s credential for the day, which I abused to go anywhere: 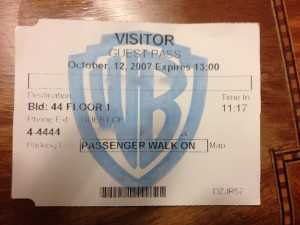 Me and Dan ended up getting a private tour but it kind of sucked and was somewhat worthless and full of people jacking you around, so I decided to be a sneak.

I didn’t have a copy of my screenplay on hand, but Dan had his.  At the time, Zack Snyder was huge because 300 had just come out.  He had his own personal office in the complex.

I managed to stealth into a building which lead directly there. People were definitely suspicious of my behavior but I didn’t care.

I took Dan’s comedy screenplay and just left it on Snyder’s desk.  I scribbled all these fake notes on there like “great screenplay outta Philly, gotta read this!” and other made up crap to hopefully get a look.

Not a soul ever called, so who knows what happened to that thing. Maybe some dude read it while taking a shit.

The point of this whole thing is that when you are pitching something, whether it’s your screenplay, your business, your band, you are really pitching yourself.

And damnit, have an elevator pitch ready.  You never know who you will meet.

What’s mine you ask?

A bunch of supermarket employees wage war on each other as departments compete for a promotion by sabotaging the in-store displays and overall presentation of their rivals.

The Produce section teams up with Dairy to take down the Butcher shop and Deli. There’s only one raise available, and the best department gets it.

I worked in a supermarket for awhile and the shit that went down behind the scenes was indescribably wild.

The comedy I wrote is called Rhubarb, and here is the first page, essentially untouched for 7 years: 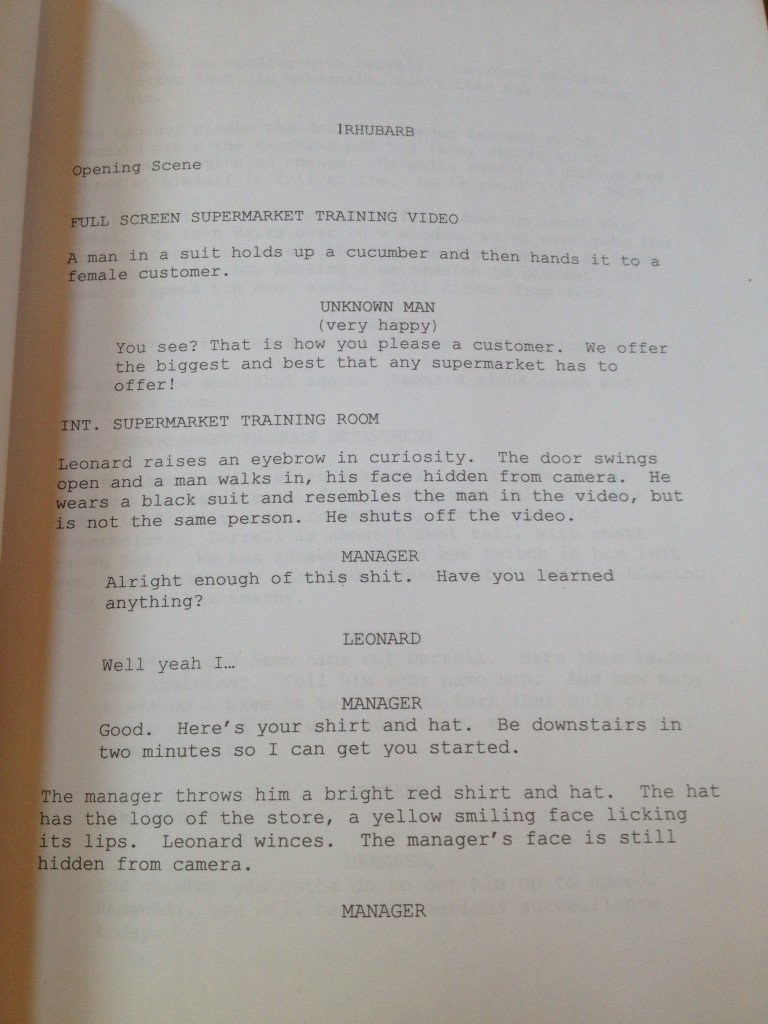 Maybe one day you’ll pay an outrageous price to see it once they decide the 7th Hangover really, really blows hard and they can’t possibly milk another cent out of it.

I gave up screenwriting around 2007 to learn guitar, launching a new journey that you certainly can’t bullshit.

Dark Challenge: Convince someone with influence that you have the credentials to take on a massive undertaking (like writing a Hollywood film) even though you don’t.

Hey, no one cares what you’re selling.  But you better be one cool cat.