An article from 22 years ago resurfaces. To me this was immediately apparent from direct experience… 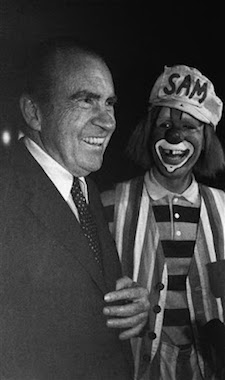 “You understand what I’m saying? We knew we couldn’t make it illegal to be either against the war or black, but by getting the public to associate the hippies with marijuana and blacks with heroin. And then criminalizing both heavily, we could disrupt those communities,” Ehrlichman said. “We could arrest their leaders. raid their homes, break up their meetings, and vilify them night after night on the evening news. Did we know we were lying about the drugs? Of course we did.”

Ehrlichman’s comment is the first time the war on drugs has been plainly characterized as a political assault designed to help Nixon win, and keep, the White House.

World “leaders” cannot have this.

Nixon called Timothy Leary “the most dangerous man in America.”
Say what you want about Leary, but it was clear that he was trying to show the world something special.

Psychedelic use was obviously far too “disruptive” for the public to know or experience, so it had to be shut down immediately.

A game of thrones.

Once I had experience my first LSD trip, I knew this to be true.

It completely breaks down the walls and reveals the world to you in a completely new light.

It changes you, scrubs away conditioning, and would make it far more likely that even a person of average intelligence could pick up on the constant scamming and power-grabbing that goes on in government.

All that needs to be said here is

“FUCK RICHARD NIXON.”
…we dance like marionettes, swaying to the symphony of destruction.

Richard Nixon has never been one of my favorite people anyway. For years I’ve regarded his existence as a monument to all the rancid genes and broken chromosomes that corrupt the possibilities of the American Dream; he was a foul caricature of himself, a man with no soul, no inner convictions, with the integrity of a hyena and the style of a poison toad. The Nixon I remembered was absolutely humorless; I couldn’t imagine him laughing at anything except maybe a paraplegic who wanted to vote Democratic but couldn’t quite reach the lever on the voting machine. ~ Hunter S. Thompson

Previous Post: Stations of the Cross – Crown Your Mind in Thorns
Next Post: You May Stop Your Internal Dialogue – All Drugs Should Be Legal