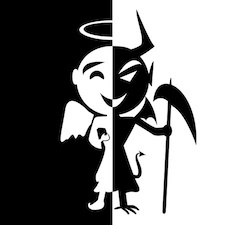 Let’s say you walk into a bar, you look around and find an open spot to order a drink.

An attractive bartender pours you a glass and asks, “so what do you do?”

I can’t tell you how many times I hear people deliver some of the worst lines in history, instantly destroying the level of intrigue, mystery, or character they could have established within seconds.

“Nothing special, just studying to get my law degree.”

Although it may be the truth, you immediately become a bore.

Millions of people every day answer the same way.

They’re every other guy…

It’s time to change that. Here’s how.

First off, you know this question is coming.

It happens every damn time you meet someone new, and in some cases that could be multiple times a day.

Start planning your lines ahead of time, knowing people will ask about your career.

If you’re a guy and another guy asks you this question, you will answer accordingly.

If you’re a guy and a girl asks you this question, you will answer accordingly.

Whether it’s a supermodel or a 90-year-old woman, know your line.

Create a story out of thin air that makes that person second guess who you are, what you’re worth, where you’ve been, and whether or not you’re worth talking to…

To start, consider what you are wearing. Let’s say you’re on your way to a wedding and you’re wearing a tuxedo.

You make a pit stop at the local convenience store to pick up some allergy medicine because your sinuses are killing you.

There’s a girl behind the desk who looks like she’s having a rough day.

Consider what your answer might be if she says, “you look nice, where you heading?”

The boring as fuck answer – “I’m on my way to a wedding.”

But what if you said, “Bond couldn’t make it, so I got the call.”

First off, you know for a fact that she was not expecting that.

Suddenly, even for a brief moment, she will wonder who she is talking to…

You might get a laugh, a smile, a smirk.

This alone could make their day even for a brief moment.

A witty response reeks of character.

If you are supreme, this might come off the top of your head without planning.

Most of the time, this kind of wit comes simply because you took the time to anticipate.

Think about how many one-liners you could drop in just this one scenario.

“I’m filling in for Jimmy Kimmel.”

“Roleplay night with the wife…”

Some of these will evoke a follow-up question, or even some wit from the other side, which is when it gets really fun.

When someone responds with a witty remark of their own, it becomes a game to see how long you can keep it up…

There is absolutely no question that you will instantly win people over if you can pull this off nearly every time you speak to someone.

See the thing is there is often absolutely no reason to answer people directly or reveal your cards.

If you delay the truth for as long as possible people will keep pushing you until they can figure it out.

You will get attention without seeking it.

If you’re a guy and you’re talking to women, this is essential for making an immediate impact, especially when talking to that smoke show that every guy is afraid to approach.

You can adapt the same slick one-liners and evades by recycling the same stories or switching them up.

Also, rip people off. Use their lines.

I do it all the time.

If you hear someone deliver a tasty lick of a line, steal it and use it later.

Be sure to write it down or memorize it on the spot by repeating it over and over, or it’s almost guaranteed that you will forget it.

Here’s an example from my own stash…

I ripped off a line he drops in this movie and use it all the time.

One girl laughed so hard she couldn’t continue the conversation.

The best part was that her friends couldn’t believe I made her laugh so hard so they followed me around all night trying to learn more.

Now admittedly that doesn’t happen every time, but the key was that I was prepared with the line and instantly let it rip.

Nowadays, I switch it up because I got sick of saying the exact same thing every time.

I’ve had girls literally stare at me,

“Seriously? That was you!”

The best part is they sometimes turn to my friends and ask if I’m lying.

These friends aren’t ready so they themselves become confused because they aren’t prepared for the question.

Now the delivered line has had a viral effect and people start talking about it.

Some people laugh, some people talk about how dumb it is.

But the point is that you get people talking about you, and for the initial girl, you still haven’t answered her directly.

Some girls will pry until you relent, which might be never…

Do people keep prying if you say…”oh, I work in finance”……?

Delivery is essential because as with a joke, success hinges upon the complete presentation.

I find that when delivering the “dice” line, acting bored with the world adds a tremendous amount of impact.

Notice how Downey sort of casually drops the line.

Under no circumstance should you be laughing or baiting their reaction to this. It must be as natural as possible, which is why preparing for delivery helps tremendously.

It takes considerable practice and skill to be able to ad lib these heaters because your brain isn’t used to thinking this way.

When you enter the “natural” stage of delivery, you are able to process someone’s question or greeting and respond with an immediate one-liner that is soaked in mystery, humor, intrigue, and foolishness.

But you have to start by preparing ahead of time.

As mentioned previously, your current attire can be a good launching point because there could be so many reasons why you’re dressed the way you are…

You can practice by picking a random goofy hat to wear.

For instance, back in October I came across this cheap witch hat.

Someone just gave it to me. Thing probably cost two bucks.

I started walking around town wearing this dumb hat.

It was around Halloween time, so I knew people were in the mood for costumes and characters.

This ridiculous hat baited many a fool into a question game.

Example – walking down the streets of Philly. Witch hat installed.

These two tattooed chicks outside a bar see me and inquire,

One of them started laughing and I could hear her say, “hah, I like that guy.”

Knows nothing about me.

“Likes” me for one well placed one liner.

This immediately shatters the ice and I could literally approach them with almost anything after that.

All because I planned a few responses ahead of time knowing that people would comment on the witch hat.

It’s unique. It’s out of place (in a way). It looked like I was on a mission, but to where?

Delivery is key and if you mess it up, do not under any circumstances reveal that you were trying to deliver a line.

I’ve heard people say things like “ah damn, I had a great line for this moment” or just totally fumble it and reveal the fact that they were trying to deliver a rehearsed line.

They must also be quick. If you sit around for more than two seconds trying to remember or think about what to say, it’s too long.

Just deliver an average Joe line and anticipate the next opportunity…

As with delivery, body language is absolutely critical.

Smooth lines ride on your overall charisma, much of which comes from body language.

Let’s say you are the bartender, and a beautiful girl comes up to you and asks you a question.

You could do one of the following:

Let’s go back to the tuxedo example.

You stroll up to a group of people, at some random party.

You’re in the vicinity of a group of girls and one asks you a question.

Immediately approach the group, stand tall and answer her question with a planned line.

Wait to see if any of them have the wit to keep the game going.

If none of them respond with anything worth “playing,” immediately walk away with a smile.

You’ll be back, and in a way they know it.

You were “that guy” that made an impression without batting an eye.

Even without the tuxedo look, this is a great way to sort people out during a networking event.

Networking can be some of the most painful shit to deal with, especially when no one of any substance is in the room.

But maybe there’s another guy there that is a total clown and also happens to be a killer blogger, guitar player, or someone you can relate to…

Keep nailing people with lines until you find someone worth your time.

This is real networking.

Networking is connecting with other people, real people, that display character, wit, or some level of passion that separates them from the losers.

One key sidenote I want to make here – you should never get drunk. Ever.

It will slow down your mind, sabotage your body language, and cause you to fumble your lines.

Victor Lustig, a famous con man, stated in his “ten commandments for con men” that you should never get drunk.

The dark art of lying requires confidence, and you don’t get it from booze. His point was also that drunk people are easier to take advantage of because they get sloppy.

I also write in my book that you should never get drunk when performing on stage, at least on purpose.

Your act suffers. End of story.

If you connect on a personal level with someone, the business connection comes naturally.

I only work with people that I can relate to…I don’t simply work with someone because they have the “skills” I am looking for in any particular endeavor.

I get bored easily when there are few people around to battle.

I firmly believe everyone should strive to improve their charisma and character.

Many people think that they weren’t “born” with natural talent but in many cases it’s simply about thinking in a different way.

In this case, the idea is to rehearse ahead of time and anticipate questions or remarks.

Once you practice, lines start to come naturally.

It could take a few months to get to this point.

Challenge: Suck people into your game of wits by “negging” them with remarks about their life.

Previous Post: Halloween – The Metal Holiday
Next Post: Reflecting on Lemmy, Legendary Guitar Wisdom, and How I Prepare for a Gig