Changing up your workout from time to time by injecting some creativity and imagination can really get you into a savage ass-kicking mood.

Let me introduce you to the Savatage Ninja Sledgehammer workout.  Here’s how it works.

You’re a ninja warrior, and your job is to beat the living shit out of anyone who wrongs the peasants and otherwise weak and helpless. We’re going back in time, no guns, all raw man-to-man combat.

You need to keep your ass in shape, otherwise someone else will be stronger and faster.  People are relying on you, and you are easily replaceable if you can’t hack it.

First, pick about a 1.5-3 mile loop that you can run, depending on your level of fitness. During this run, we are going to imagine a few scenarios, play some music, and do an exercise at a predetermined spot.

I love the band Savatage because they are classic style heavy metal with some really great riffs, and no screaming/growling vocal bullshit.  A truly talented band that slipped through the cracks and should get their due.  I highly recommend you check them out.

Here’s how the workout will play out: 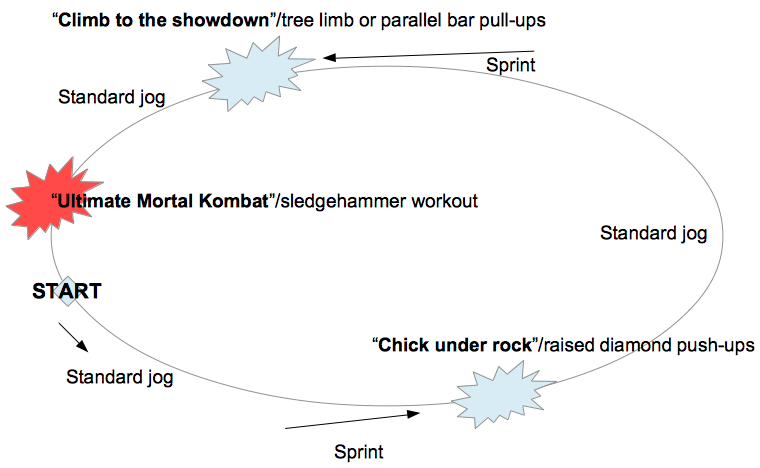 You’re out patrolling the local grounds.  As you’re jogging along, you hear some girl screaming bloody murder…what the hell? Something has happened…

When you are about 100-150 meters from your diamond push-up location, play this song. During the buildup in the beginning, you will sprint at about 80-100% capacity until it reaches the main riff at around 40 seconds in.  At this time, with no rest, immediately drop to the deck and start doing raised diamond push-ups until you become exhausted.

The diamond push up is executed by putting your hands close together, with your thumbs just about touching.  Keeping your elbows in, lower your body weight down, and incorporate your triceps into the lift up.  Here’s some good instruction on how to do it from Oskar at skinnyfattransformation.com. 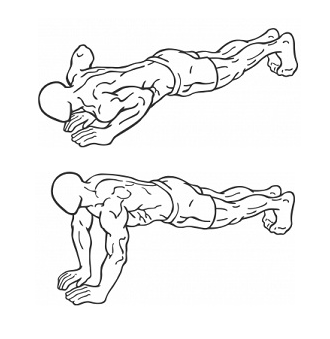 I try to pick a curb to raise my feet up to get some extra drop. 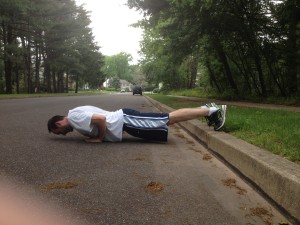 This chick is trapped under a rock, but luckily she’s alive – are you going to let her die? Are you strong enough?  Is this her last moment on this planet?

Push that fucking boulder off so she can get out.

Once you’re done there, tell that chick you’ll deal with her later. She’s smitten by your mutant strength, but you don’t have time to sit around and flirt all day.

Scenario 2 – The Climb to the Rooftop Showdown

You’re just making your way back into town, and the local peasants acknowledge your presence.

But what’s this? Someone is going ape shit because your family has been kidnapped at the top of a tower.

Are you kidding me, who needs to die now?

You need to climb to the top of this tower, or your whole family is about to die. Are you going to make it?

Throw on the song and sprint about 100 meters to the next station, pull-ups. Here I like to either grab a tree limb, or use a local workout station that happens to be near me.  I like to do parallel bar pull-ups because it has monkey bar style rungs. 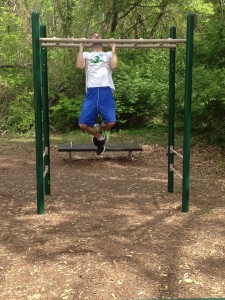 While the song is kicking, blast out as many pull-ups as you can.

Are you worn out from pushing that boulder?  Better hurry, there isn’t much time and you have no idea what the hell is going to happen at the top.

You gotta be kidding me.  Some local brigand thinks he can kidnap your family, torture your children, and steal all of your earnings.

You look around, but your usual ninja blade is nowhere to be found.  The only thing there is a large hammer.  After all this, do you have the strength to wield it?

This one comes compliments of Brett at artofmanliness.com.  I’ve been using a sledgehammer because I have no idea where one obtains a giant mace like he has.

I especially love the Barbarian Squat he demonstrates at 2:54.

Music – Your favorite adrenaline pumping song.  I even recommend some video game music.  Listen to that shit played metal guitar style and tell me it doesn’t get you fired up.

This nefarious brigand thinks he’s going to get away with this shit. Are you going to let it happen?  Good thing your workout includes the Savatage Ninja Sledgehammer routine, because you just pounded that son of a bitch into the ground.  Your forearms are about to fall off the bone, but you’ll live to see another day.

I like doing these imagination style workouts because it gives you a real-life application for working out certain muscle groups.  The music sets the scene and tempo, and it keeps you motivated.

Got a creative workout idea? Let me know about it.

Previous Post: Scars and Guitars: Fatal Mistakes on the Six String
Next Post: The Dark Side of Album Covers