Sneaking into an event that you do not have a ticket to is both thrilling and highly rewarding.

There are many skills and behaviors to hone in order to successfully crash an event.  It is a challenging endeavor few people will have the stones to attempt.  Let me give you a few reasons why it’s worth the “risk.”

1) Even if you get caught, by admitting defeat with a smile, the chances that you will actually be punished harshly are pretty low.  It’s all about knowing how to manipulate people…I will delve into this a bit more later.

2) The entire experience is an adrenaline shot to the arm, and it will test your confidence.  You will learn that security is often very weak and with the right attitude you can convince anyone that you belong where you are.

3) Bragging rights, pictures, and hang-outs with celebrities – something you can reach out and take!

Dion Rich’s Rules of the Game

Dress the part. Move slowly but quickly. Adopt the attitude that you belong there.

We’ll get to Dion Rich in a minute.  But these are the absolutely essential rules about crashing.  Let me tell you how I did it.

I was at a large sized concert in Camden, NJ.  I had never sneaked backstage before, but I hatched a plan on the fly that worked far more easily than I expected.

First off, I was wearing a T-Shirt of the headlining band.  I wore a fan club lanyard that I had obtained by, well, being in the fan club.  It was shiny and certainly looked like some sort of VIP pass.  If I was seen backstage, it looked like I belonged.

Reconnaissance is key. I didn’t even watch the first band, and spent most of the time looking around for an entrance that likely led backstage.  I saw some guys moving equipment through a door that was close enough to the stage, a good prospect.  The security guard was an old man, and I decided he must be a local hire. I figured if I can’t get passed this guy, I don’t belong in this game.

There was a bathroom right next to this door. I decided that I would go into the bathroom, and when I came out, immediately go for the backstage door, dash right through it, as if I had something important to get done and no one should bother me.

It worked.  Out of the corner of my eye I could see the old man lean toward me as if he wanted to stop me, but perhaps my swinging fan club lanyard gave him enough to believe I was already backstage before.

Now comes the fun part – uncharted territory.  Not only did I have no idea where the hell I was, but the people back there are far more likely to sniff out suspicious behavior.  I kept walking as if I belonged there. Act the part.

I passed band dressing rooms, and tried not to let excitement slip onto my demeanor.  Most people back there are working and aren’t walking around with a giant grin because they could come face to face with some of their favorite band members.

I round a corner.  Another security guard, sitting in front of a large door.  The stage.

My heart beat a little bit faster.  I literally didn’t know where to go next as I might as well be in the Labyrinth.  He began to eye me up, I could feel it.  There was a water cooler directly in front of me, but no cups.  I turned to him and asked, “hey man…where are the cups? Any more back here somewhere?”

He responded that he didn’t know, but the key here was that I approached him, establishing a stronger presence backstage.  From here, I turned down a different hall and walked into a small room with food.  This room would come into play later.

I took another deep breath, and again made a bold approach to the backstage door.  I gave him a nod, and since he had seen me before, I guess he figured I was good to go. SUCCESS.

I saw the crew load in. I saw the bands warming up. I pretended like I was bored so no one would become suspicious.  I sniped a few pictures, like this one behind the drum set during the show. 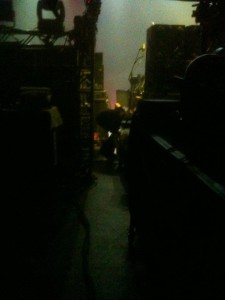 Man was I having a blast…then suddenly, all the tailgating beer hit me and I boy did I have to piss. Do I risk going back out the door, going to the bathroom, and coming back through, knowing the security guard could be suspicious? It was friggin’ brutal, you all know how it feels.

I immediately decided I needed to hit the head.  I barged through the door, found a bathroom, emptied out a gallon of booze and probably part of my soul.

Now I needed another confidence trick to get back in – I returned to the food room, and found a doughnut.  I chomped a nice big bite so my mouth was full, like a complete slob.  I approached the door guy again and said “what’s up man”.  He couldn’t hear what the hell I said, but more importantly, he felt it was enough to keep me back there.

Here is about 10 minutes of raw uncut video footage I took while backstage:

At around 4:30 some lucky bastard wins a guitar.  I actually thought about walking out as “the guy” when Dave began to announce it but figured that could have gotten me blacklisted or worse.

I proceeded to take a few more shots and eventually had to get out while things were hectic during the load out. 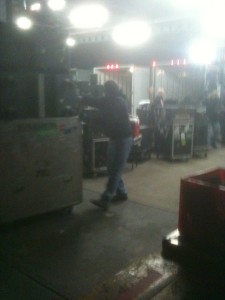 1) Be polite and never be a dick even if you are caught or someone questions who you are. I’ve never actually been nabbed, but if it happens just smile and admit defeat. Security will often just let you go if you aren’t an asshole.

2) Have a story ready for the most common reasons you might be back there.  This includes photography (if you have a camera), working with the local rigging crew, being a blogger covering the show, etc.  Know it, deploy it with confidence while looking the person in the eyes.

3) Take pictures.  No one will believe your stories if you don’t have a way to prove it.  Below is an absolutley terrible picture I took with David Ellefson on my 2nd Megadeth backstage sneak, about a year later.  I had just gotten a new phone and didn’t know how to work it….took me 3 tries to get this piece of shit…but it’s without question me with him!

4) Cigarettes make you a popular guy.

5) Feel free to talk to people that are hanging around.  Slowly listen to conversation and work your way in.  Become friendly with someone that might bail you out later.

6) Riz’s Challenge – grow enormous balls and approach the security guards directly and ask them to do something for you.

If you are wondering who Dion Rich is, I will say nothing other than go ahead and Google him.  Here is his book, which I found after I pulled this stunt.  He sneaked into 33 straight Super Bowls!  Read it, and apply his methods to learn how to sneak backstage.

My biggest mistake was not getting enough pictures of me with the musicians.  I did however say “nice show, Lemmy” to one of my all time favorite metal legends, Lemmy Kilmister, after he handed his bass off and left the stage.

His response was, “thanks man,” confirming every story I have heard that he is a good guy…

Related articles across the web