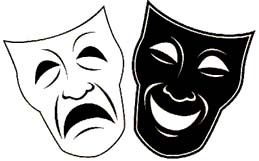 I often imagine a world where people can only cheer or boo for a live performance, emphatically and decisively.

Maybe I’m warped, but would the world of entertainment be far superior without feigned praise or indifference?

There is nothing worse than a band finishing a song or a comedian delivering the punchline only to hear silence or a few half-assed claps.

The silence may be disinterest or lack of emotion, but often it’s simply because it would be “offensive” to unleash hell.

“It’s not the right thing to do,” someone will tell me.

If you choose to perform for a live audience, then you are assuming a role. Your relationship to the crowd is “entertainer.”

Maybe you have earned your way with an effective array of songs, jokes, tricks, whatever. They key is that you earned it.

But if you get up there and fail to be entertaining, you should immediately get the hook, your status as “entertainer” revoked.

Fail again and you get the hook even faster until you eventually get hooked at the front door.

Over time no one in their right mind would continue to perform if it was obvious they were in fact a terrible performer.

Would you give up? Constant beratement would be a serious indication that you need more confidence, practice, or both. That’s it.

I don’t know how many times I’ve been in a room where someone leans over to share the fact that a band sucks, only to clap for them at the end of the set.

Why the fuck would you do that?

I worked at a local bar that primarily showcased local live music, and you could be driven mad on a nightly basis…

People would stare at their cellphone totally disengaged from an act. When the person was done they would let out a bogus applause. Why. Why I ask you. If there is nothing entertaining or redeeming about the act, boo them off the stage.

The owner would allow horrific bands to play prime slots on weekends. It should be a bloodbath to get these. If you as the decision maker are having this problem, you need to find someone who can sort the good from the bad. If this requires a band to play for you on a Monday morning to prove they have it, so be it. Your show needs to be firing on all cylinders during prime time. Random people that walk in should want to stay.

DJs. Want to like ’em, almost always hate ’em. Here’s another person that for some reason gets a free pass for mood murder and bleeding your bottom line.

A skilled DJ needs to understand people. Paying someone to stand up there blasting “the latest music” with no regard for the atmosphere or energy is a painful error.

The person should understand the bar and the owner. They should discuss with you how they will tactfully deploy the music. Never hire someone to simply take control of your crowd, the people that spend money.

There needs to be an appropriate conversation volume. Unless it’s a dance club, the music should not be on 10 the entire time. If there are only few people in the bar, keep the music down a bit. If a band just finished a loud set, keep it low and let people converse, regroup, and recover from eardrum fatigue.

Observe the crowd. If the music is clearly providing no benefit to the current situation,

Genuine applause is often immediate and with utmost sincerity.

Confirmation is granted to hard workers when their original entertainment is effective and well received.

Entertaining a crowd is not supposed to be easy nor should it be forgiving. Greatness should be rewarded while anything else should be dealt with accordingly. Comedy tragedy.

If the specatacle does not illicit a raw and emphatic applause or cheer, then it failed to make an impression on you.

A great entertainer will always make a lasting impression, and therefore we should strive to ensure these people get their time to prove it. By quick eliminating stragglers, the world can be exposed to greatness.

Many of you are thinking music, art peformance…it’s all subjective.

I agree with this to an extent, although I want to be clear about something.

Didn’t relate to her music, but damned if she wasn’t witty, a great speaker and had powerful stage presence.

The gentlemen attempting to rock were drunk, disorganized, out of tune, far too much down time between sets. You could tell they didn’t practice and they sure as hell didn’t treat it like a business. They should have been booed off.

You might get dragged to see your buddy’s band play and their songs could be atrocious. But damned if it mattered because they made up for it in comedy.

I motion that we bring back the hook and clean out acts that suck.

Artists affected by this boo will feel it and doubt their ability. They will reconsider whether or not their skills are sufficient. They will either be determined to correct it or they will quit.

We should be OK with quitters getting out of the game. Otherwise the role of entertainer will too often fall to those who do not have what it takes. Not good for anyone.

Bill Burr proves my point in the following video.

After two comics before him were mercilessly booed, Burr withstands the assault and turns it into an applause. An entertainer, not a hack.

I imagine a world where people get pulled the fuck off the stage faster and faster until only the strong remain.

Go ahead and remain remain silent, or feign your approval.