A band is a business.

If you don’t treat it that way, odds are you don’t write good music.

Audiences find you dull and uninspiring.

Here are my top 10 lessons in business, from being in a successful band.

1) People don’t give a shit about you 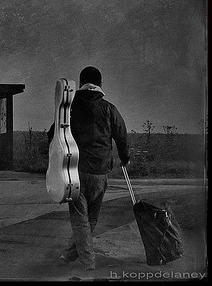 Until you prove that you can provide a good product (no matter what that product is) not one person will care about your shitty band.  Most important of all, if you cannot provide an entertaining live show, no one will come back and you will not be successful.

Prove that you put in the work by giving people something to remember.

A strong band is a team more than anything else and even if you are not that skilled individually, a strong core unit can outperform a group of virtuosos that was cobbled together.

Everyone must be “all in” or nothing.  Even if you are not trying to “make it.”

Every band should be unique at some point in their evolution.  But when you first start out, skip past a lot of trial and error by copying the strategy of great bands – even to the point of covering their songs.

My band’s approach has always been to mix cover songs with original songs until we have an established fan base or we have enough original content that isn’t shit. But, that doesn’t mean you have to cover songs people will know.

If you passionately believe in the quality of a song, master it and play it live.  People will show genuine interest after a show, wondering which songs were originals and which were covers.  You can introduce people to your favorite bands this way and also keep your performance somewhat of a mystery.

This entices people to come back.

4) Take even the “worst” of gigs at first

No one has to let you play anywhere.  Your favorite bar never heard of your band? Too bad, it could be months before they allow you to play there.

They have a business, and so do you.  It has to be mutually beneficial.

Take any and all gigs at first and don’t act like you are entitled to play anywhere you want. Have fun and show audiences that you can rock even if the stage is the size of a closet.

If you are trying to make a good impression, don’t get trashed.  Save all the partying for after the show.  There is nothing worse than one guy torpedoing a whole set because he can’t perform.

6) Thank people who gave you a chance

If someone took a chance on your band, did you a favor, or provided any help at all, be sure to thank them and build a network of allies.  Connections come from everywhere but as long as you don’t act like you deserve success it will eventually come.

Give ’em a t-shirt they might be wearing when they are caught talking about the escaped chimp on the morning news.

7) Have business cards in your back pocket

Easily the best way to give someone everything they need to know in a matter of seconds.

Some people just want to know how to contact you and don’t feel like talking for 2 hours about how great your next album is.  Hand ’em the info and let it do its job.

8) Put money earned back into the band

If you make some cash from cover fees or some other way, put this money back into the band.  Gas money, t-shirts, new guitar strings, all this stuff can get a boost from show or merch earnings.

9) Have a professional social media or web presence

Some people hate Facebook, I know.  But you need ways to let people know when you play.  Marketing can be done quickly and easily online.

Get a presence on ReverbNation and do a lot of work up front.  Keep your info up to date and network with other bands.

Get creative, have personality, and ask people what they want to hear.

10) For those of you trying to make it

Either give up now, or go all in 450%.  The chances of you “making it” in today’s world are laughable and as close to “fucking impossible” as it gets.

You’ll need to do everything on this list and far more to even remotely call it sustained success as a professional artist.

Look, being in a band is one of the most satisfying experiences you will have in your life. But whether you get cheers or crickets after each song will all come down how much you put into it.

Starting a band should come with a business mindset.

A great product, a strong team, effective networking and patience will take you to the next level.

Know your brand, know your audience, be humble and don’t act like a dick.

I think at least some of you can manage that.  Make me proud.

If you are on the bill with other bands, stay for the entire show and talk to as many people as possible.  It’s why you’re there, it’s why they’re there.

12) If you don’t get the singer right, the whole thing goes down

That’s it on that point.

The guy tonight was crippled and had a cane.  He still walked around, carried shit and made sure every band sounded good over the span of 4 hours.  Do these guys a favor and…

We sounded sorta shitty the night before the gig, something was off. But we ironed it out and things went well. Had we not snuck in that extra practice, the gig would have been the poor performance…

More on bands and business