I was raised in a fairly strict Catholic family and during the Lenten season we would be forced to attend a horrific event known as “Stations of the Cross.”

Think of your days as a kid.

You loved running outside, playing ball, teasing girls, being a jackass.

Then dumb adults come by one day and tell you that there’s this great party going down at the local church called Stations of the Cross. It’s a can’t miss event!

I’m not going to bother to sit here and explain the entire concept. Read about this shit if you really want to, but the first few lines will do.

As if mass itself isn’t bad enough, these adults thought that us kids should spend time reliving the torture and death of Jesus Christ.

If I recall correctly the entire school was involved, which means first graders through eighth graders were forced to attend.

The Stations of the Cross are depicted in a circle around the church, usually in stained glass or some kind of carving. The priest stands in front of each one dressed like a goof, carrying incense and spewing nonsense from his little book.

Let me tell you – it was torture reliving the torture of Jesus Christ.

The priest would read from his book and we would all respond, zombies, like a cult.

We would kneel. Then stand. Then kneel again.

The smell of incense would close my throat.

The whole time I kept thinking to myself, WHY THE HELL ARE WE DOING THIS… 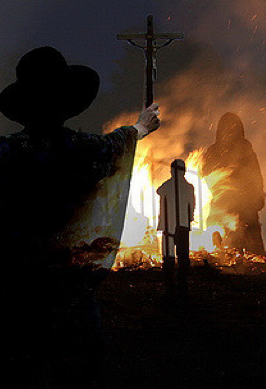 It made absolutely no sense.

WHY ARE WE DOING THIS?

There was no apparent benefit. But as a child, you are essentially forced to assume that adults know best.

The priest cried out, detailing the beatdown of Jesus. Our savior headed to his death, which he was apparently OK with.

Ok great. Fuck him for putting himself in that position.

Or, fuck those people who did it to him and let’s move on.

This heinous act is glorified and praised and passed on as something that we all needed to experience.

I will tell you that this is the kind of thing that can push you to the lunatic fringe.

Forcing children to go through this bullshit warps their mind.

And this was not a one time experience.

This was EVERY WEEK through Lent until Easter came around.

On a normal week, I was forced to attend mass twice a week, since once apparently wasn’t enough.

Fucking Lent comes around and you toss a weekly Stations of the Cross in there – what a crime.

I want every adult out there to read this carefully.

Children do not understand the world.

They will believe whatever you tell them. They will take it seriously.

If you subject their mind to the “frame of reference” that is an ancient torture ritual, then be prepared for them to grow with it.

Kids can and do wonder WHY, and they often do so about every three seconds.

They lack the life experience however to formulate their own opinion.

Therefore, it is up to the wise adults to determine what is a great foundational experience, and what is a total fucking waste of time.

I’m going to say it one more time.

If you have kids, and you send them to Stations of the fucking Cross, you’re making a mistake.

You yourself must’ve gotten the ol’ cross and then never realized how badly you were fucked.

You then pass this misery down to your helpless children that rely on you to guide them in life.

Some kids have a rough time early on.

I was bullied, and it made me furious, confused, and misguided.

I was already in a perpetual state of anger and rebellion.

I was not a person that you then want to subject to something as absurd as Stations of the Cross.

Mental torture from stupid pointless religious ritual can have a profound effect on someone’s life, but it almost always falls under the radar or gets a pass.

It slowly adds up.

No one gets any benefit out of it, and some kids will slowly feel the madness creep in.

Shortly after beginning this article I was watching one of the more popular TED talks on depression.

In the opening statement, the man describes his daily life as “the Stations of the Cross” – 2:04

To each his own.

Don’t send your kids to “Stations of the Cross.”

Don’t confuse them and shroud them in misery.

Let them experience their own trials and tribulations in life and help them get through it.

That Catholic guilt trip – what a disgrace.

Was Jesus the greatest con-artist ever? Click here to find out.