In The Illiad, a cunning sneak mission is born of great fear and uncertainty in the Achaean warlords.

King Agamemnon finds himself hard of sleep so he rouses the experienced warriors on the Achaean side, burning the midnight oil to come up with a hack plan to ward off disaster at the hands of the Trojan army.

Menelaus, husband to Helen, shares in the fear and woe as even kings and leaders face the prospect of death.

The very path to being king.

But alas, their honorable and courageous past fails to inspire a plan…they muse on what would essentially be a suicide mission by a would-be hero.

“Why arming now, my brother? To spur a volunteer to spy on Trojan lines? Not a man in sight will take that mission on, I fear, and go against our enemies, scout them out alone in the bracing godsent night – it will take a daring man to do the job.”

Someone completely mad, of course.

My friends, isn’t there one man among us here, so sure of himself, his soldier’s nerve and pluck, he’d infiltrate these overreaching Trojans?

Perhap’s he’d seize a straggler among the foe or catch some runner floating along their lines.

What plans are they mapping?

Are they bent on holding tight by the ships, exposed? – or heading home to Troy, now they’ve trounced our armies?

If a man could gather that, then make it back unharmed, why, what glory he’d gain across the whole wide earth in the eyes of every man – and what a gift he’d win!

All the lords who command the ships of battle, each and every one will give him a black ewe suckling a young lamb – no prize of honor like it.

They’ll ask that man to every feast and revel.”

On the Trojan side, Hector is also considering the spy game, but without the desperation of imminent defeat.

…whoever will dare…what glory he can win…

Hector misses the mark however and selects some braggert fool named Dolon to run the gauntlet.

The Achaeans choose Diomedes and Odysseus, famed and wily tacticians.

Odyssesus is handed a magnificent cap, passed down through its share of sagas.

At nearly the same time, both parties embark on the path to glory.

Dolon’s head rolls across the dirt.

The Achaeans, spectres that sow discord and take spoils.

The men who thrive here have a unique past, their will tested, their minds changed.

They take what is theirs, risking mental anguish for a shot at ultimate glory.

Not a suicide mission, but rather…play time.

A time for enjoyment and thrills.

Living out what could be one of the greatest moments in the history of warfare.

Tales of the tremendous feat will live on for centuries.

Death does not deter, for living these moments makes it life to begin with.

Greek heroes, kings, legends…all regard this as a pinnacle of greatness…a necessary madness that almost no man possesses.

A rarity born from dark trials and iron will.

These demi-god villains are “the best dark.”

And all the glory will belong to them. 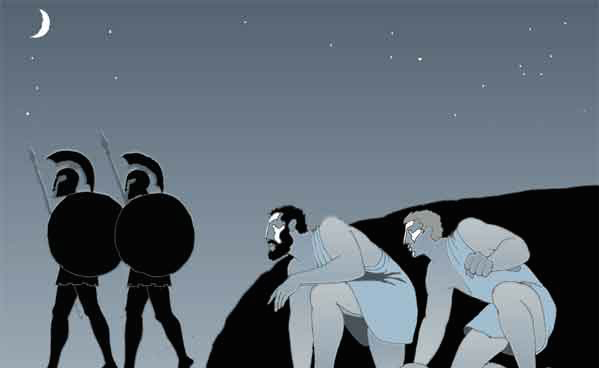